Can Patriotism Be Misdirected?: Learning Guide

When the 5th century Christian philosopher Augustine of Hippo describes the functions of eloquence he reiterates by quoting probably from memory what the ancient Roman statesman Cicero famously said in his work titled simply Orator. "[T]o be eloquent you should speak 'so as to teach, to delight, to sway  ... Teaching your audience is a matter of necessity, delighting them a matter of being agreeable, swaying them a matter of victory'" (De Doctrina Christiana IV.12.27).

Some examples of historic speeches that are eloquent and patriotic:

Since ancient times up until now, however, eloquence in the service of patriotism has also been used to horrific ends by dictators, tyrants, and demagogues. A fear of foreign peoples and ideas is common. It is woven throughout U.S. history from the Alien and Sedition acts of the late 1700s to the immigration debate in the early 21st century. A good example of when eloquence and patriotism were used to malign others was the rabble-rousing speeches given by leaders of the Nativists, which sparked the May and July riots of 1844 in Philadelphia.

This learning activity guide is designed for students to engage newspaper accounts about the Nativist Riots and to encourage civil discussions about the central question: Can Patriotism Be Misdirected? 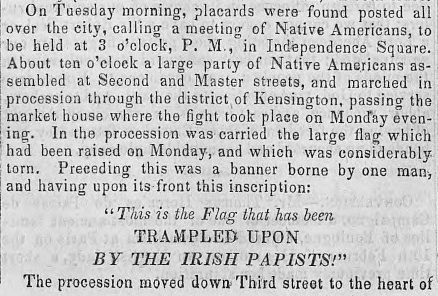