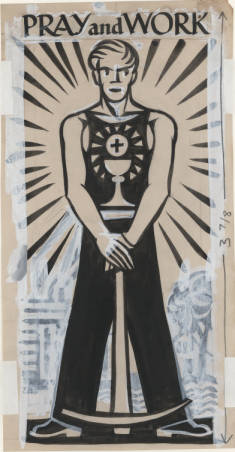 Below is the link to the full CRRA website, as well as the links to other ongoing initiatives of CRRA.

If you have comments or suggestions that will help make this guide more useful, please email them to Ted Bergfelt, Chair, CRRA Subject Guides Subcommittee, using the following link: Send Email

From Xavier University of Louisiana. The Harmon Foundation was established in 1922 by wealthy real-estate developer and philanthropist William E. Harmon (1862-1928) It originally supported a variety of causes, including playgrounds and nursing programs, but is best known for having served as a large-scale patron of African-American Art that helped gain recognition for African-American artists who otherwise would have remained largely unknown.

From the University of Dayton. This is a sampling from our Holy Card Collections.

In the Spotlight: Mother Teresa

From Marquette University. The Indian Sentinel featured articles about Native Americans across the United States and their evangelization by the Catholic Church. Most were first-hand accounts by lifelong missionaries in the field that were often illustrated with photographs they had taken.

From the University of Notre Dame. The Harley L. McDevitt Inquisition Collection consists of several hundred items, from printed volumes to unique manuscripts and images. The project is intended as a resource for students and researchers and thus contains thematic introductory essays to materials and digital facsimiles of documents.

From Loyola University of Chicago. Items from the Rare Book Collection written by and about the Society of Jesus.

From University of St. Michael's College. The Kelly Library has digitized over 15,000 volumes of pre-1923 imprints from its collections.

From the University of San Diego.

From the University of Dayton. The Marian Library - International Marian Research Institute maintains a collection of thousands of cultural items conceptualizing Mary, the mother of Christ. This is a sampling of three dimensional objects that have been photographed using 360-degree imaging. The process offers viewers a unique chance to rotate and view the pieces from all sides. Click the “View 360” link available on each item to rotate and examine virtually.

From the University of Dayton. The Marian Library maintains a collection of over 700 pieces of Marian sheet music, including hymns, Mass settings, and even Christmas carols. The collection includes pieces for voice, piano, organ, even full orchestras, and includes songs in twelve languages dating from the sixteenth century to the present.

From the University of Dayton. This series of bas-reliefs of the work of Spanish artist Antonio de Oteiza represents facets of the Marianist vision and spirit These ceramic sculptures were commissioned by Spanish Marianists to commemorate the September 3, 2000, beatification of Father William Joseph Chaminade (1761-1850), founder of the Marianist Family.

From the Catholic University of America. The National Catholic Welfare Council (NCWC), officially defined as the annual meeting of the American hierarchy and its standing secretariat, was established by the bishops in 1919. In 1922, the NCWC was renamed the National Catholic Welfare Conference, not Council, underlining the fact that it was consultative rather than legislative body.

From the University of Dayton. A novena, derived from the Latin "novem" meaning "nine," is a prayer that usually is said on nine successive days or weeks. The prayers are often from devotional prayer books or booklets and sometimes include recitation of the rosary (a rosary novena). While items in the Marian Library collection are dedicated to a specific title of the Blessed Virgin Mary, novenas may also be dedicated to other saints, to Jesus Christ, or to the Holy Spirit.

From Our Lady of Victory Missionary Sisters. See all online collections describing the ministries of the OLVMS.

Our Lady of Fatima

From the University of Dayton. The Our Lady of Fatima collection contains historical materials related to the apparition of the Blessed Virgin Mary in Fatima, Portugal. The collection includes photographs, holy cards, postcards, stamps, sheet music, and other materials related to popular devotion to Our Lady of Fatima during the twentieth century.

From the University of Notre Dame. This project provides access to nearly 800 archival photographs gathered over the years by Rt. Rev. Astrik L. Gabriel, O. Praem., that document architectural sites sponsored by the Order of Prémontré. All of these photographs date prior to World War II and are important documents of the many sites that were damaged or destroyed during the War.

From the University of Dayton. This collection, assembled by the Pro Maria Committee of Lowell, Massachusetts in 1965, contains photographs and images relating to the Marian apparitions in Beauraing, Belgium that occurred in 1932 and 1933.